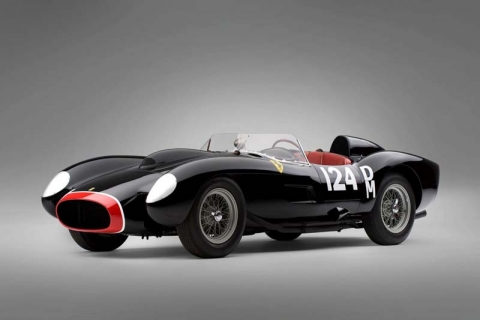 This past Sunday, a 1957 Ferrari 250 Testa Rossa set the auction world record for most expensive car ever sold, fetching €9,020,000 ($12 million). The legendary racer was auctioned off at the third annual Ferrari Leggenda e Passione event at a factory in Maranello, Italy, hosted by RM Auctions and Sotheby’s. The previous auction record was set by a 1961 Ferrari 250 GT, which went for $9.6 million. Lately, Ferraris have been on a tear with prices continuing to climb precipitously.

The Ferrari 250 TR was produced between 1957 and 1958 with only 22 units built. The car quickly entered the racing scene, running the 1958 Buenos Aires 1000 km, where it finished fourth. From then until 1961, the 250 TR ran 19 international races, coming away with 10 victories. In the years after it quickly gained iconic stature as it become more and more coveted as a collector’s item. The car has become well known for its instantly recognizable Scaglietti-designed ‘pontoon-fender.’

Also of note, the last Ferrari F430 to roll out of the factory was auctioned off as well. A certificate from Ferrari chairman Luca di Montezemolo indicating this fact will ensure that this becomes a collector’s item as well. Who knows, maybe in 40 years, it will be worth $10 million (probably not). For now, the money from this auction will be donated by Ferrari to help rebuild Abruzzo in central Italy, much of which was destroyed by an earthquake last month.