19 of the Most Dangerous Race Tracks in the World 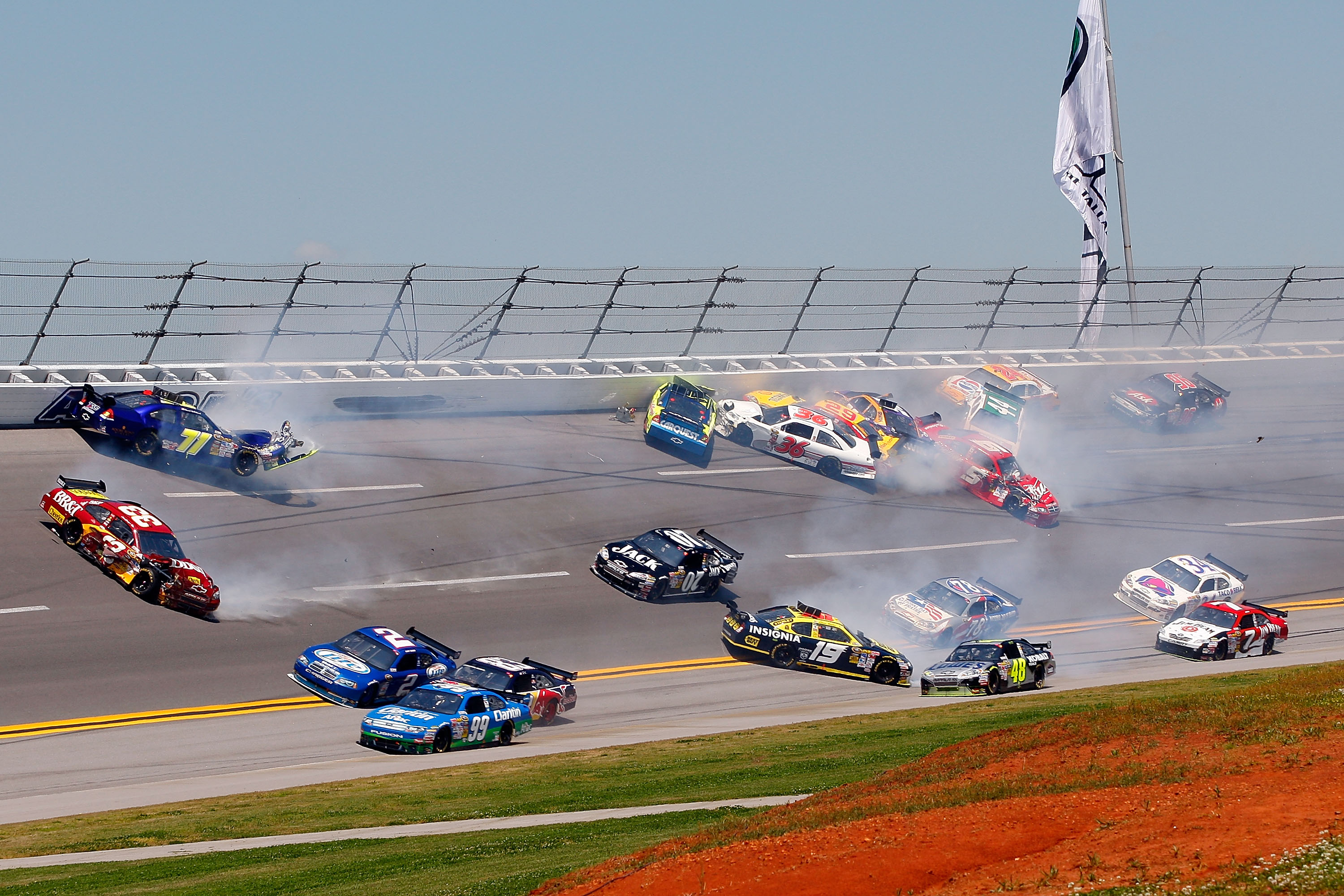 Although modern technology and enhanced safety features have helped to reduce the hazards of motor sport in recent years, the sport is still far from risk free. With drivers reaching breakneck speeds, motor racing is inherently dangerous, no matter what the track, but there are some race tracks that are more notorious than others. Here we take a look at 19 of the most dangerous race tracks in the world, taking into account both their history and design. 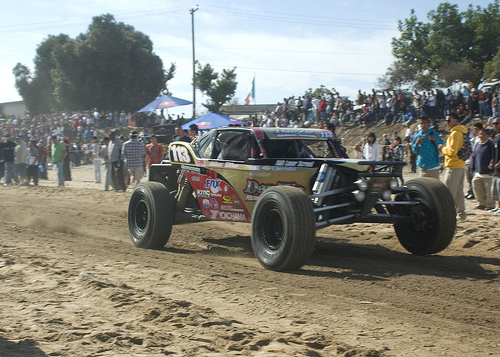 The SCORE Baja 1000 is an off-road race set in Mexico where various types of vehicles compete on the same track including motorcycles, production cars, dune buggies, trucks and custom racers. Whilst the course has remained relatively unaltered over the years, the real danger here come in the form of improvised booby-traps, obstacles and jumps created by spectators, in an effort to make the race more exciting. 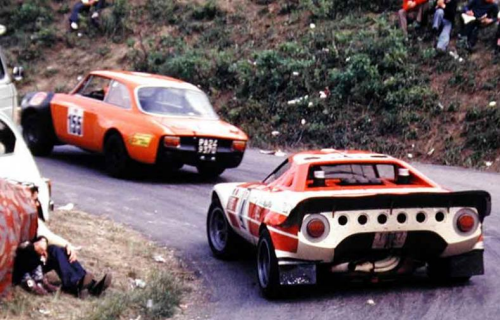 Founded in 1906, the Targa Florio was the oldest sports car race in the world held in the mountains of Sicily. So dangerous is this notorious track, with its mountain roads, tight hairpins, mud, gravel roads, spectators and buildings literally inches from the edge of the track, that it was actually declared ‘too dangerous’ to be run as part of the World Rally Championships. 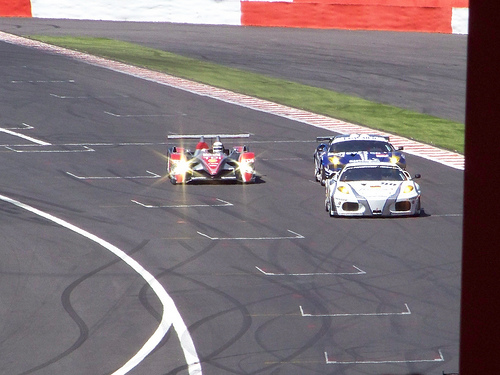 Home to Formula 1’s Belgian Grand Prix the Circuit de Spa-Francorchamps is considered by many as one of the most challenging race tracks in history. One of the most famous parts of the circuit is the notorious Eau Rouge corner which combines a hairpin bend, steep uphill section, sweeping left-right-left turns and a blind summit. Since it opened the Circuit de Spa-Francorchamps has claimed the lives of 23 drivers. 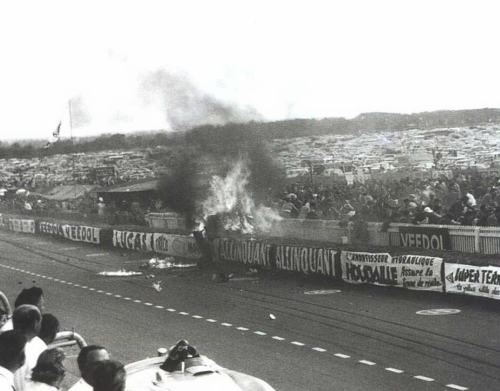 The Circuit de la Sarthe in Le Mans, France is home to the 24 Hours of Le Mans race, the oldest endurance race in the world. Although the race has claimed the lives of 24 drivers over the years it is most infamous for the crash of 1955 in which driver Pierre Levegh was killed following a collision with a bank after contact with another car. The flying wreckage and resulting fire claimed the lives of 87 spectators and injuring 120 more. 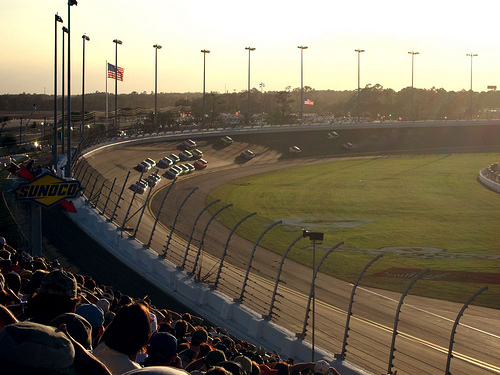 The Daytona International Speedway track in Florida is most famous as the home of the Daytona 500, the most prestigious races in NASCAR. Built in 1958 the track features a banked design enabling drivers to reach significantly higher speeds and giving fans an improved view of the cars. Since the track opened in 1959, the Daytona International Speedway has claimed the lives of 28 drivers. 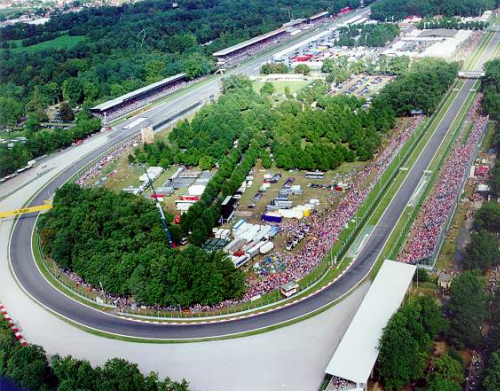 The Autodromo Nazionale Monza race track is located near the town of Monza in Italy and is most famous for hosting the Italian Formula One Grand Prix. Opened in 1922, Monza is famous for its high speed straights. Historically The Monza circuit was the scene of many fatal accidents claiming the lives of 35 spectators and 52 drivers, however in recent years modifications to the track have reduced speeds and improved spectators safety. 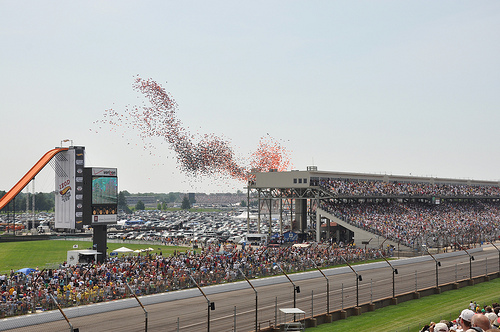 Built in 1909 The Indianapolis Motor Speedway in Indiana has a capacity of 400,000 spectators making it world’s largest spectator sporting facility. The track is a two and a half miles long ‘rectangular oval’ and, whilst technology and improved infrastructure has seen massive improvements in safety, early races saw many serious accidents with 42 drivers losing their lives. 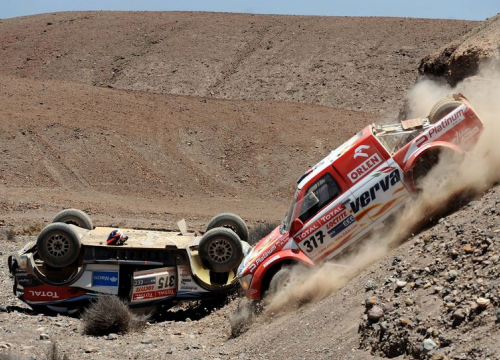 Formally known as “The Paris–Dakar” this annual race features off-road vehicles competing in an endurance race on tough terrain. The race is open to amateur and professional drivers who must race across sand dunes, mud, grass and even rocks up to distances of over 500km each day. It is believed that as many as 50 people have lost their lives competing in The Dakar Rally which averages out at almost 1 death for every year since the competition began. 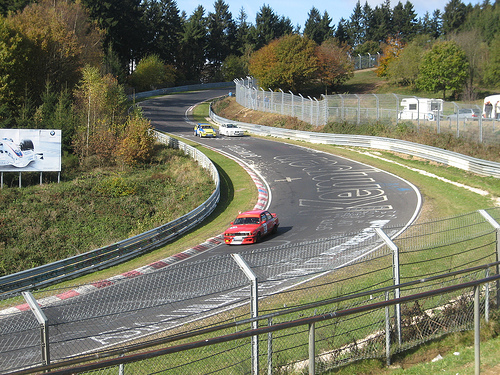 The Nürburgring in Nürburg, Germany features both a modern Grand Prix race track as well as the older and longer North loop track nicknamed ‘The Green Hell’ by racing driver Jackie Stewart. Considered by many as one of the most demanding circuits in the world, it is the place where racing legend Niki Lauda nearly lost his life in 1976. These days’ fatalities during professional races are rare however the track is open to the public sessions which result in an average of 7-8 deaths every year. It is not unusual for track closures to happen several times a day with medical intervention and clear-ups following crashes. 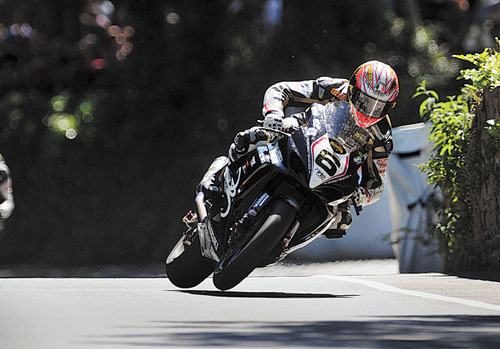 The Isle of Man TT course is almost 38 miles long and is littered with potentially lethal features. Riders must negotiate over 200 bends, numerous rises and falls, rocks, telephone polls, buildings, and stone walls – all whilst travelling at an average speed of 130 mph and reaching top speeds of over 200 mph. Since racing began on the course in 1907 over 200 people have been killed there and in 1976 The TT lost its world championship status after being deemed ‘too dangerous’. 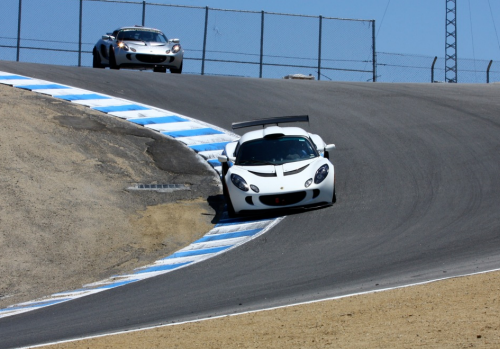 Originally built in 1957 in California, and now know as the Mazda Raceway Laguna Seca, this paved road racing track is just over 2 miles long and is used for both car and motorcycle racing. The Laguna Seca is probably most famous for ‘The Corkscrew’ a combination of two turns which, due to an elevation change, blind crest and uphill apex approach, it is considered one of the most challenging corners in the world of motorsport. 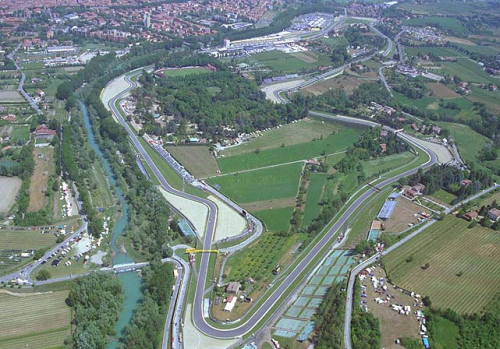 Named after Ferrari’s late founder Enzo and his son Dino this auto racing circuit near the Italian town of Imola was once home to the The San Marino Grand Prix. Following 3 serious incidents in 1994, including the death of three-time World Champion Ayrton Senna at the notorious Tamburello Corner, Imola was modified to improve the safety of the track by the introduction of slower chicanes at the Tamburello and Villeneuve corners. 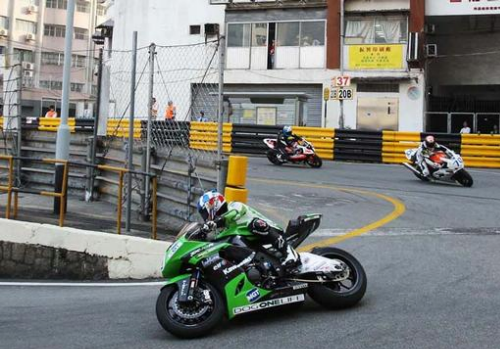 Said to be the most dangerous bike race in the world The Macau Grand Prix is an annual motor-racing event that takes place in Macau, China. Macau is a street circuit where both car and motorcycle races are held. The circuit features fast straights and hairpin bends in narrow city streets with absolutely no room for error.
Old Bridge Township Raceway Park 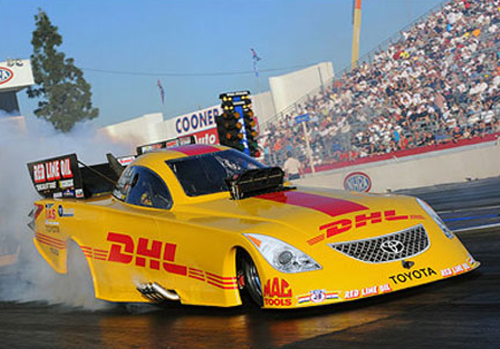 The Old Bridge Township Raceway Park near New Jersey was first opened in 1965 and has been attracting the world’s top drivers ever since. The track can facilitate up 85,000 spectators and features 2 dragstrips, 3 motocross tracks and a 2 km road circuit. Drag racing is inherently dangerous due to the high speeds achieved by cars in such a short space of time and in recent years 2 drivers have lost their lives at the Old Bridge Township Raceway Park. In June 2008, Scott Kalitta was killed when his Funny Car burst into flames and crashed during qualifying and in 2010 Neal Parker died of head injuries after crashing his alcohol-fueled funny car at high speed. 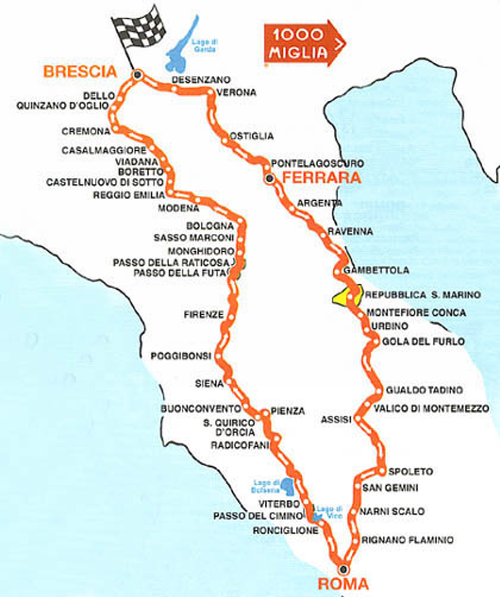 The Mille Miglia was a 1000 mile open-road endurance race which was held between 1927 to 1957 in southern Italy. The race featured high-powered touring cars racing on public roads from the city of Brescia to Rome and became infamous for horrifying crashes and the reckless behaviour of the drivers. Banned in 1938 several spectators were killed in an accident, the race restarted in a different format after WWII. The Mille Miglia was finally banned for good in 1957 following a crash that took the lives of 12 people. In recent years the Mille Miglia has been revived in the form of a vintage car event in homage to the ‘the greatest race in the world’. 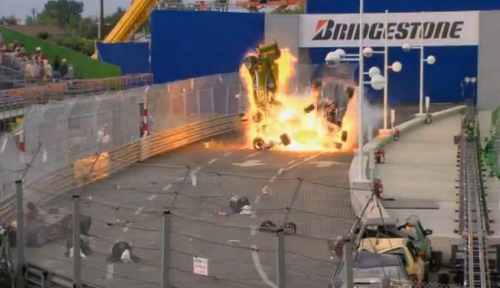 Circuit de Monaco is a race circuit featuring the narrow streets and harbour area of Monte Carlo and La Condamine. Most commonly referred to as “Monte Carlo” this street circuit hosts the Formula One Monaco Grand Prix and, due to its tight, narrow, twisty roads, is rated as one of the most dangerous and exciting in the world. The Circuit de Monaco’s famous tunnel is particularly difficult for drivers due to the quick switch from light to dark and, if the track was not already an established F1 favourite, it could not be added to the Formula One schedule as it would not meet safety requirements. 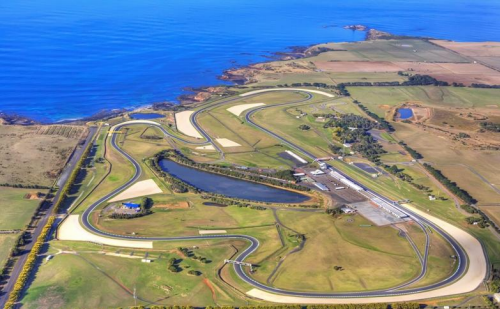 Opened in 1956 The Phillip Island Grand Prix Circuit is a motor racing circuit on Phillip Island, Victoria. The circuit is Australia’s most important purpose-built race track and the combinations of ultra high-speed straights, fast turns and extreme elevations make it one of the world’s most dangerous and exciting. 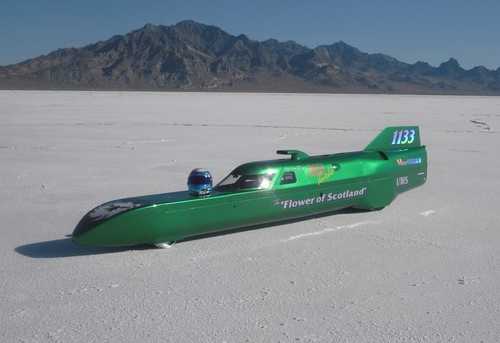 Bonneville Speedway is essentially a race track marked out on the Bonneville Salt Flats near Wendover, Utah. The track is particularly popular with those seeking to break land speed records as its salt flats are as hard as concrete and so vast you can actually see the curvature of the Earth. This circuit has seen some of the fastest cars on earth making it one of the most dangerous by default. 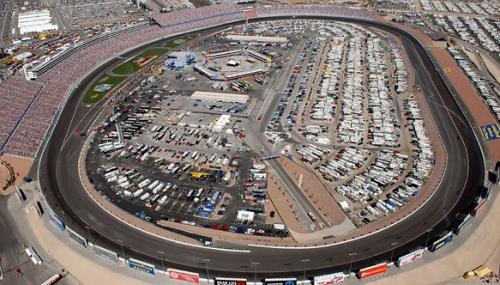 The Las Vegas Motor Speedway is situated in Nevada close to Las Vegas. The first race at the speedway was on 15 September 1996 and, up until recently, there had been no fatal accidents at this racing arena. However on 16 October 2011 the Las Vegas Motor Speedway saw its first fatality following a 15 car pile-up during the Izod IndyCar Series season finale race. The crash resulted in the death of 33 year old British racing driver and two-time Indianapolis 500 winner Dan Wheldon. Controversially, Wheldon had been given a $5,000,000 incentive if he could win the race from the back of the grid and, even though he and other drivers had raised concerns regarding high speeds and a cramped track Wheldon still took to the track promising spectators ‘pure entertainment’.

This guest contribution was written on behalf of CarFinance247. If you are looking for a used racing or sports car, then be sure to speed over and check them out.